Man, that was some bad fishing

Two truths about fishermen: We will always find a way to measure our success, and we will always find an excuse to explain our lack of it. The idea of self-judgment is inherent in any goal-oriented pursuit, but it is paramount in fishing.

More often than not, we pass this judgment based upon one, single criteria – how many fish did we catch or, in certain situations, how big were they? And if we do well, that is we catch a butt load of fish or that one pig that gets immortalized in photos, we say that fishing was good. The river was on fire. It was epic. But if we do poorly, get skunked, endure constant refusals, we say the fishing was bad. What we are really saying is, If fish are caught it means I am a good fisherman; If fish are not caught, it is the fault of the river. 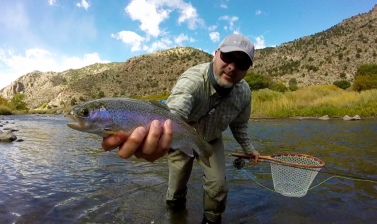 Now, this is understandable. In a sport where we truly have so little control, where there are so many built in excuses, where the goal is so self-evident, we are bound to take this approach. And I am not going to talk anybody, including myself, out of this type of reaction. However, I am going to suggest a simple change in diction when we talk about our success rates – let’s distinguish between “bad” fishing and “tough” fishing. They are not the same thing.

“Bad” fishing suggests the conditions were not conducive to catching fish, no matter what the skill level of the fisherman. These are days when the flows have dropped dramatically forcing fish to scramble for deeper water, cover, and avoid actively feeding. These are days when water temperatures are so high or so low that fish dive deep to control body temperature and hold where a fly just cannot be placed. These are days when you walk mile after mile and do not even spook a fish out of hiding or see a single nose break the surface. On days like these, skill level and fly selection have very little to do with success. They are days where the fish are simply not cooperating.

Bad fishing can also be attributed to an unhealthy river. In Colorado, years of mining and overdevelopment put many of the state’s rivers in jeopardy. Rivers like the Arkansas, Clear Creek, The Blue all suffered tremendous fish loss and near sterility in some cases. While the Arkansas has benefited from Superfund cleanups and has rebounded to be maybe better than it has ever been, and Clear Creek continues to improve, The Blue outside of the town of Silverthorne is a relative disaster. Fishing on the stretch below can be absolutely futile because, frankly, there just aren’t many bugs which means there just aren’t many fish.

The South Platte below Cheesman Reservoir, to give another example, was decimated in 2002 due to the Hayman fire which scorched thousand of acres in the surrounding hills causing even minor rains to send tons of crushed granite silt down to fill up the river bottom. The result was fish kill and loss of bug habitat for years. At this time, fishing became downright awful. It is only now beginning to rebound.

The bottom line is bad fishing is generally caused by conditions rather than skill. When we say fishing is bad, therefore, we should use this term to describe these conditions. These are the days where nearly every fisherman on the river is trudging from hole to hole, shuffling along  with head lowered, stopping only long enough to peer into their fly boxes in a desperate attempt to search for a solution in vain . Bad fishing sorts us all into the same pathetic club. But take solace in knowing that you are not alone in this tragedy and just enjoy being outside.

On the flip side, “tough” fishing is something quite different. When fishing is tough, it implies that fish can be caught, but it ain’t gonna be easy. This is where skill becomes paramount to success, where fly selection, drift, attention to detail are the difference between getting skunked and hooking into a few.

One great example of tough fishing is the spring creek. In Montana, there are a number of these famous, persnickety bodies of water that run gin clear and warm, meandering through grassy meadows all year long. Hatches are prolific, but very specific, causing fish to become ultra selective. The fish, while large and willing to eat, can be extremely difficult to catch. They will feed on size 22 tricos or 24 midges, gorging for hours on top on the millions of bugs trying to take flight or deposit their eggs. To catch these fish requires a stealthy approach, often crawling along the river edge to get the perfect angle. It is vital you do not cast your line over the fish, but attack downstream or at a 45 degree angle. The drift must be perfect (drag free), tippets must be delicate, hook sets must be timed perfectly. In short, the fish are not going to make it easy. 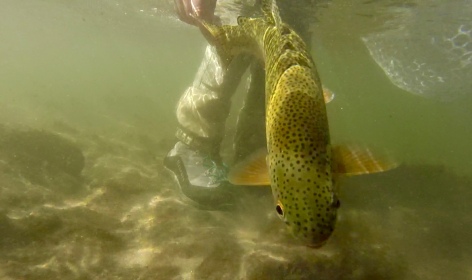 Tough fishing requires the fisherman to “figure things out,” to search for a pattern, to solve the puzzle. But, unlike bad fishing, the puzzle can be solved. While bad fishing can make you want to sell your fishing gear on Craigslist, tough fishing can be quite rewarding. It is the ultimate test of being able to “fool” a fish, to trick it into eating something fake. And even if this means you only land one or two of the dozens of fish you attempted to hook, the fact your skills and abilities allowed you to do so should give you a tremendous amount of self-satisfaction.

It might feel like a simple vocabulary lesson and it might be nitpicking or splitting hairs to be so particular about the language we use as anglers. But, as precise language should, using the correct term to describe your level of success can say an awful lot about who you are as a fisherman.

Featured Reading: Landon Montana finds himself on a journey through the Colorado Rockies where he must decide whether to run from his past or commit to what is right in front of him