Each year for as many seasons as I can remember, I have set a goal for myself. The goal gives me something to focus in terms of “big picture” instead of worrying so much about each and every outing being its own victory or defeat. And, I guess that is the other reason I like long-term goals. They prevent me from using words like “victory” and “defeat” or even measuring my outings at all. Regardless of the day I have had, no matter how many or how few fish are caught, it is just one more day in the course of trying to accomplish something in the long run. It is the big picture that counts. 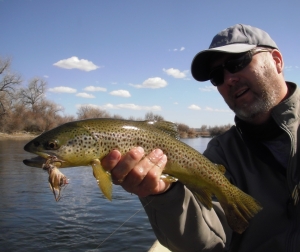 every month of the “season” (pretty much May to October back then). I then wanted to catch a fish every month of the year. That took me two years thanks to a bitterly cold January. Then, it was to catch a certain number of fish, to catch big fish, to catch fish on my own flies, or on X amount of rivers in a single year. Well, you get the idea. Nowadays, my goals aren’t about fish, but about getting better at aspects of fishing –delicate presentations, reach casting, subtle mends, better hook sets, high water, skinny water, sight fishing, fishing from a boat. It all has made me a much better fisherman and provided me with something to shoot for other than chalking up a W or a L at the end of each day.

Last year, my goal was to become better at fishing streamers. I don’t mean just chucking in a woolly bugger or a slumpbuster on the off chance it might connect, but to truly stalk big fish throwing some seriously bushy hunks of meat. I bought a 7 weight fast action rod and a 250 grain sink tip line and a spool of 0X. I learned to tie gongas, and home invaders, articulated flies with fish skulls and dumbbell eyes. I worked on my haul and double haul and keeping the loops open and the fly out of the back of my head. I also learned to pinch down barbs… the hard way.

I took to carrying two rods – a 5 weight with a nymph rig or dry/dropper and my streamer rod. I would work up a run to its head working the 5 weight rig and then work it back down stripping my streamer: haul, cast, upstream mend, strip, pause, put action in the tip, swing, strip, repeat. I can milk a decent-sized run for a good half hour using this method, and not only does it produce fish, it is a great cure for getting bored using the same method all day.

So, what did I learn? I learned that while streamer fishing might not produce the most fish, and there are far more casts than there are hook ups, two things are definite:

1. Because trout are predators, and relatively vicious ones at that, the biggest fish in the river will, without question, attack something large and fleshy if they feel they have the opportunity to devour it. When you hook up on a streamer, you might just have “the one” on the end of the line;

2. When you do get a strike, in the words of Nuke Laloosh from Bull Durham, it tends to “announce its presence with authority.” It may not be as exciting and eye-pleasing as a dry fly take, but it is an adrenaline rush like no other in fly fishing. And to watch a large fish chase down your fly and then hammer it, turn its head downstream and try to eat and run makes the hair on the back of your neck stand at attention and your guts rush into your feet. At the risk of a pun, it just takes once and you are hooked. 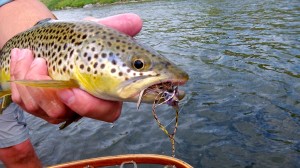 I am by no means an expert streamer fisherman, but my yearly goal forced me to chuck fur and feathers for the majority of the season, even when I didn’t really think it was the best method for that particular set of circumstances. I almost never went a day without catching at least one fish and usually hooked up more than a few. I never got “the one,” but I like to think he had a go at it and got the best of me.

I guess I have to thank my friend Matt for introducing me to this exciting new world. Working on the Yellowstone River as a guide last summer taught him the benefits of streamer fishing and the fun that could be had in the pursuit. He taught me how to tie a few patterns, and helped me with my technique. Sometimes, that’s all it takes, to have somebody push you a little bit and not relent – for your own good, of course.

Featured Reading: Landon Montana finds himself on a journey through the Colorado Rockies where he must decide whether to run from his past or commit to what is right in front of him